Last year, for my birthday, my family and I spent the day at Discovery Cove in Orlando.  This was such a fun day and a great experience in Orlando!  We were in Orlando for just over a week, so we jumped between a few different hotels.  We started at Universal’s Endless Summer Resort.  I’ve personally stayed at all of the Universal Orlando resorts and this was the last one I needed to check off my list.  However, while we were there, we didn’t want to go to the Universal parks, as Endless Summer does not offer Express Pass.  While we were staying at Endless Summer we visited Discovery Cove.  We also stayed at Loews’ Royal Pacific while we went to Universal Studios and Islands of Adventure and at Disney’s Polynesian Village Resort and spent some time there.

SeaWorld has a Six Flags vibe, but adds animal interactions.  We went to SeaWorld the day after we were at Discovery Cove and enjoyed several of the coasters and loved the animal attractions.  For more about SeaWorld, be sure to listen to Tidbit Episode #8 where Sharon talks about her family’s adventures there!  Aquatica is the waterpark that is right by SeaWorld and Discovery Cove.  My family did not go there on this trip as we chose to go to Universal’s Volcano Bay instead (listen to full episode #24 for more about Universal’s Volcano Bay – it’s by far my favorite water park!).  But it is nice that your tickets can include these other parks. 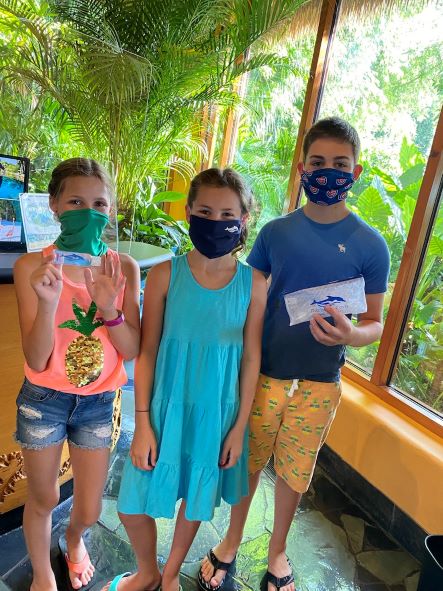 It’s no secret that I love Orlando.  I jokingly call it my second home.  I end up down there often, usually at Walt Disney World and Universal Orlando, to keep up with all of the changes and additions to the parks for my clients.  But what surprised me the most about Discovery Cove, is even though you’re right in the heart of Orlando, it really feels like you’re somewhere completely different – much more like paradise!  The grounds are very lush and beautiful.  The pools, river, and snorkeling options are fun and immersive.  For me, it felt a bit like a beach vacation destination and the all-inclusive feel reminded me of an all-inclusive resort or maybe a cruise excursion. It’s definitely unlike any other experience in Orlando. 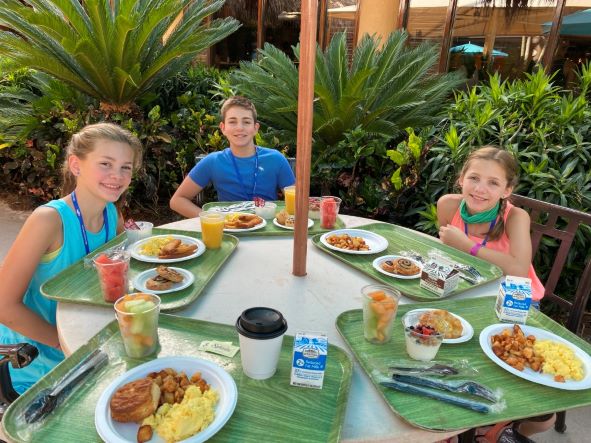 So yes, your day at Discovery Cove is all-inclusive.  The ticket includes breakfast, lunch, food, and beverages. Breakfast and lunch are severed at Laguna Grill.  Breakfast runs from 7:30 am to 10:30 and lunch from 11 am to 3:30 pm.  Both meals are included and all-you-care-to enjoy!  While the food definitely isn’t gourmet, we definitely didn’t go hungry.   Breakfast options included pastries, fresh fruit, scrambled eggs, sausage/bacon, French toast tickets, cereals, yogurt, etc. For lunch, there are wraps, salads, burgers, hot dogs, etc.  Even picky eaters won’t go hungry.  And we do recommend trying the Pina Colada Cupcakes!

Snacks and drinks are also included throughout your day.  There are various snack huts with options like pretzels, cookies, ice cream, chips, and my trio’s (and let’s be honest – my favorite too) Icees, and all of this is also unlimited and included.  Other drinks include water and soda, and for adults who are 21+ there is a selection of beer and wine available as well.  There are also upgraded drink packages for mixed drinks.

My trio (Bo especially) loves anything with unlimited food.  I am sure that I had at least four Icees.  Both the pina colada and banana Icees were amazing!  White Cherry was good too! 😉 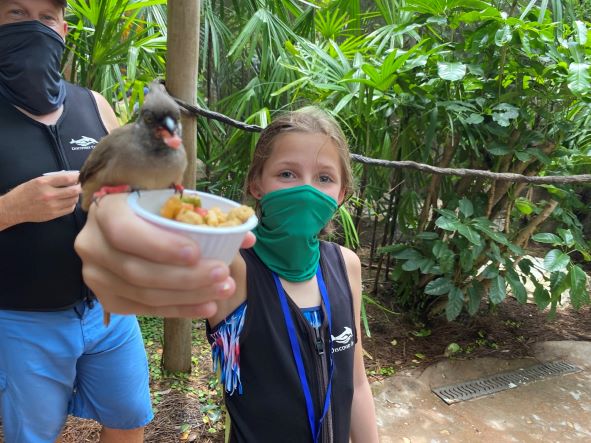 After check-in and breakfast, you’ll grab your wet suit and be able to start exploring the park.  We started our day at the Grand Reef.  The water is cool for the thousands of tropical fish and stingrays in this coral reef habitat. This was really neat and is similar to the Rainbow Reef at Disney’s Aulani – but much larger.

The Aviary was another fun animal experience.  It’s accessible from the Wind-Away River.  It is filled with different types of birds and there are feeding stations throughout.  All of us loved feeding and holding the birds!  The macaws and the peacock were so pretty!

There are other types of animals as well – Otters, Dolphins, turtles, anteaters, armadillos, sloths, etc.  There are upgrades you can add to your ticket that includes swimming with the dolphins or sharks, mingling with the flamingos, feeding the rays, and even an option to be an animal trainer for the day. 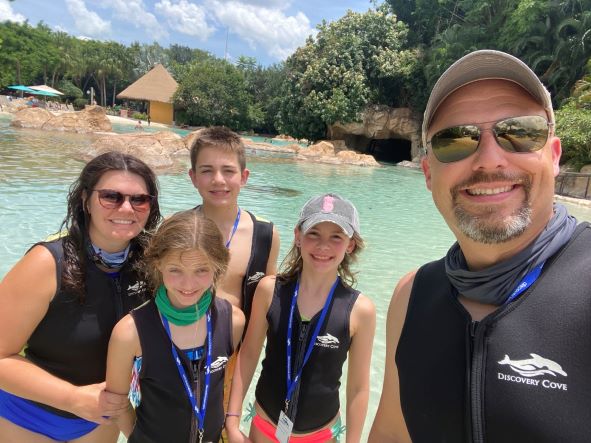 I am a sucker for a lazy river.  While I loved the adventurous aspects of Discovery Cove, I also loved the relaxing aspects too.  Floating through the Wind-Away River with my family was a highlight – I felt like I was in a whole other world with just my four favorite people.  The river is well-done and winds by sandy beaches, through a rain forest, under rocks and waterfalls, and through an underwater cave.  The Aviary is located off of the river and you can see a few other animals during the journey as well. This was probably my favorite!

I also enjoyed swimming with the trio in Serenity Bay.  This pool is heated to 85 degrees (which feels pretty nice after being in the chilly reef!) and has a beach and tropical vibe.  There are lounge chairs and seating through the parks so you can soak in some rays and enjoy as well! 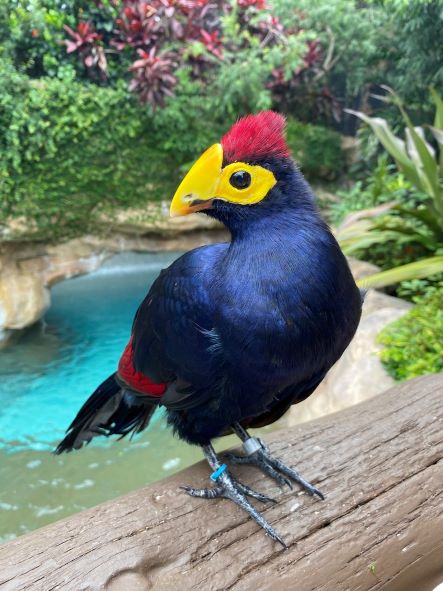 I had wanted to visit Discovery Cove since I first saw it on an episode of Jon and Kate +8 before I even had kids!  My trio was 10 and 12 when we finally went for the first time and they were great ages.  They were able to do everything and enjoyed and appreciated the animals and snorkeling.  However, I think from age 6 and older, they would have loved it – with my three, I would have spent the entire day worrying if they would have been any younger!  And while I loved having my trio there and being able to experience this with them, I think adults and friend groups would also have a very fun day at Discovery Cove.  While it is family-friendly, adults or groups would definitely enjoy it.  If we lived closer to Orlando, I can see my three loving a birthday party here, even as teens and pre-teens. There really is something for all ages, which makes it really enjoyable with a family.

If we’ve inspired you to visit Discovery Cove in Orlando, we’d love to help you plan your trip and help make it magical.  You can email your favorite Pineapple Escapes agent or info@pineappleescapes.com to get started! Jamie, with her husband of 16 years, Mike, and their trio, Bo (13) and Clara and Anna (twins, 11), love traveling the world and sharing their adventures. While she never could have dreamed that her years of education would take her down this career path, she is thankful each day for the experience and flexibility this career provides. Jamie loves to help families plan lasting vacation memories!

Your email is safe with us.

Receive Notifications of Our Newest Posts!